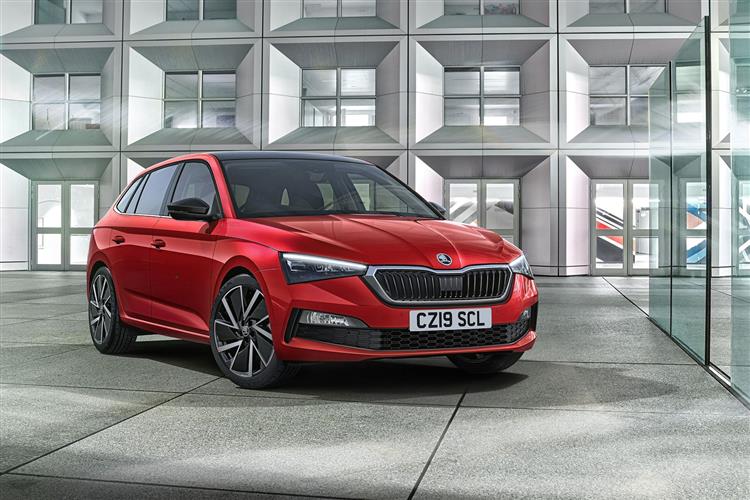 This deal is a stock offer. The specification for this vehicle has been pre-selected.

Skoda's family hatch models aim to bring you something a little extra. Here's another of them, the Scala. You get engineering - and a price - that's very supermini-like. But more interior space than the pricier Golf or Focus-sized family hatch models the Czech brand is pitching this car against. The Scala is based on the more compact MQB A0 chassis used by superminis like the Volkswagen Polo and the SEAT Ibiza. And its name comes from the Latin meaning 'stairs' or 'ladder', reflecting this model's claim to be 'a leap forward in design and technology' - at least for a Skoda. Plus as usual with its offerings, the brand is offering it at slightly lower prices than the opposition and includes a range of 'Simply Clever' design features intended to make everyday life with this car just that little bit easier. It all adds up to a contender that aims to bring something a little different to the family hatchback class. Time to put it to the test in 1.5 TSI 150PS petrol form.

Given that whole 'big car feel' ethos that Skoda's so keen to talk about with this model, we thought we'd try a Scala fitted with the largest petrol engine it's ever likely to get, the 1.5 TSI 150PS unit that you'll also find fitted to every model bigger than this one in the current Skoda catalogue. It can be had with manual transmission, but here we've elected to test it with that DSG auto 'box, in which form it dispatches 62mph in 8.2s on the way to a maximum (that no Scala owner will ever approach) of 136mph. This dual-clutch gearbox is predictably slick in the mid-range, but we're not sure we'd choose it in this car unless we really were urban-bound. Apart from the fact that when wedded to the 1.5-litre engine, it pushes the price of this car beyond the level most prospective owners will want to pay, we've found this transmission a bit hesitant when pulling away from junctions. And it can be found hunting around for the right ratio with a touch of indecision when rapid bursts of acceleration are needed. If you occasionally undertake longer trips in a car of this kind though, this package is still worth a look.

Give a family hatchback-class car a platform designed for a smaller supermini and you'd expect it would be more cramped inside. Skoda claims to have reversed that logic here. And done so with a sensibly stylish twist. It's all rather impressive. At the wheel, it's certainly a step up in quality from the previous model, helped by the installation of a large freestanding centre-dash screen, which will be 8-inches in size with typical mid-level trim. This smart glass-frontage appendage deals effectively with the usual DAB stereo, Bluetooth 'phone and car informational functions and is embellished with Skoda's 'SmartLink' smartphone-mirroring set-up. More unusual though, are the so-called 'Simply Clever' features, little touches to make everyday life just that little bit easier. Things like the little pockets in the sides of the seats, which also have stowage areas beneath; the chilled glovebox that keeps drinks and chocolate cool; and our favourite touch, this pull-out umbrella built into the driver's door, an idea borrowed from Rolls-Royce. None of which would really matter much if cabin ergonomics hadn't been spot on. But Volkswagen Group products don't tend to get that kind of thing wrong these days and this one certainly hasn't. It's easy to get a really comfortable driving position thanks to plenty of seat and wheel adjustment. And in the rear? Well despite its supermini-derived platform, the Scala out-shines all its most obvious family hatch-segment rivals in terms of leg and headroom. There's a big 467-litre boot too.

Pricing for the 1.5 TSI DSG auto model we tried is pitched at just over £21,000, which means you'll need a budget of just under £20,000 for the manual version. There are two trim levels with this engine, mid-range 'SE' or top-spec 'SE L'. At 'SE' level, you get cruise control, rear parking sensors, a 'Bolero' infotainment system with an 8-inch touchscreen, an integrated umbrella and a height adjustable passenger seat. If you're happy to spend more on your Scala, then your dealer will direct you to the plushest 'SE L' model, which includes the brand's top 'Amundsen' infotainment system with a 9.2-inch glass touchscreen, plus there's a hi-tech digital cockpit, climate control air conditioning, keyless entry with start/stop and a colour multifunction trip computer. The exterior design features 17-inch alloy wheels, full LED rear lights, dynamic indicators and privacy glass on the rear windows.

It's interesting to note that the penalty for switching to the gutsier four cylinder TSI petrol engine, the 1.5-litre 150PS unit we're trying here, is also quite minor over the alternative three cylinder 1.0 TSI unit. Even if you saddle it with the DSG auto gearbox that featured in our test car. In this form, the Scala returns up to 45.6mpg on the WLTP combined cycle and 113g/km of NEDC-rated CO2. That's thanks to cylinder deactivation technology that sees two of this powerplant's four cylinders deactivated under light to medium throttle loads. The DSG set-up also helps with a 'coasting' function that at cruising speeds, will disconnect the gearbox from the powertrain, leaving the engine to idle until you next need it. Plus all the petrol engines get the usual industry efficiency aids like brake energy regeneration and an engine stop-start system to help them meet the current Euro 6d-TEMP emission standards. Finally, while it's certainly true that other rivals better the three year 60,000 mile warranty that Skoda provides, you can extend your cover to four or five years by paying extra. Not that you really need to. The brand regularly tops independent consumer satisfaction surveys: according to real people, there are few more satisfying cars to own.

Will buyers previously foreign to the Skoda brand be won over by this car? Possibly. It won't suit those always yearning for a spirited drive but otherwise, its list of attributes ought to be enough to earn a place on your family hatchback shortlist. After all, this model is more affordable than most of its rivals - and more spacious too. In addition, it's well built, acceptably efficient - and to some eyes really quite stylish. We'd probably only choose this 1.5 TSI 150PS version over the alternative 1.0 TSI variant if we habitually engaged in longer trips though. Either way, there are more exciting class choices to be sure. But, by and large, you don't buy a family hatchback for excitement. All the reasons you would want such a thing are covered off here with typical Skoda thoroughness. And with enough style and quality to make brand loyalists feel rather smug. This probably won't have been the car you started out wanting in this class. But there's just a chance that it may be the one, you actually need.