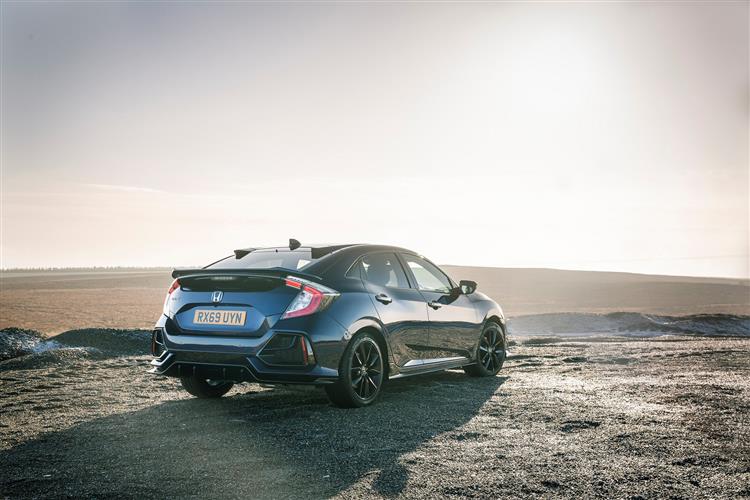 The tenth generation Honda Civic is a car that should stand out for discerning buyers in the family hatchback sector. June Neary discovers the personality beneath the bonnet.

Will It Suit Me?

The tenth generation Honda Civic is certainly one of the more interesting shapes in the Focus-sized family hatchback sector - in contrast to some of the conservative Civic shapes of the past. Which in my book, makes it a welcome contender in this segment, especially in the revised, more affordable form we're going to look at here. Honda aim to reduce the average ownership age of Civic buyers with this model and I certainly think they'll do that. The more I looked at this car, the more the sweeping lines grew on me.

Check out the on-paper stats of this tenth generation Civic and you'll find that in almost every respect, it's conformed at last to conventional family hatchback expectations. Every respect except one - and you're looking at it. The styling - just about the only part of this car created in Japan rather than Europe - remains unique, divisive and charismatic. It's a 5-door-only bodyshape this time round. Behind the wheel, there's far more conformity to class convention than there is outside, though not to the point where you'd feel that you were sitting in anything other than a Honda. Gone are the unusual split-level instruments and the driver-focused asymmetrical fascia. Instead, you now view a relatively conventionally-styled instrument binnacle through the grippy three-spoke wheel, though closer inspection reveals that the middle dial is actually a TFT-LCD screen flanked by stylised digital temperature and fuel gauges. Anything this can't tell you will be covered off by a 7-inch centre-dash infotainment screen. It comes complete with Garmin satellite navigation, internet browsing capability, a reversing camera, 'Apple CarPlay' and 'Android Auto' 'phone-mirroring connectivity and a DAB audio system with at least eight speakers. In the rear, there's 45mm more room for your knees and a full 95mm more space for your legs: as a result, there's probably more room back here than in any other Focus-segment contender bar Skoda's Octavia. Out back, there's a 478-litre boot. Here, I particularly liked the clever side-retracting parcel shelf, the cassette for which can be positioned on either side of the cargo area. It works in concert with a fabric panel that clips in on the inside of the rear hatch and means you don't have to have the usual moulded shelf that you'd need to take out every time it's necessary to carry a really bulky load. This is a feature other brands are bound to copy and when they do, I'd like to see extendable material used that doesn't crease and rough up so easily when you pull it out at an angle. Safety's pretty important to me - as to many Family Hatchback buyers. Previous Civic models were recognised amongst the safest cars in their class and this version has continued the theme. With a tough body structure and subframes, recessed pedals, double pretensioners on the front seatbelts and side curtain airbags, this Civic has achieved a Euro NCAP five star result for front and side impact safety.

The interior is spacious and comfortable, the driving position exemplary and the careful dashboard design distinctly favourable. Plus the car is comfortable, even when fully loaded with three adults, two children and half my local toyshop. Engine-wise, most buyers will be choosing between a couple of 'VTEC Turbo' powerplants, a three cylinder 1.0-litre engine developing 129PS and the four cylinder 1.5-litre 182PS variant I tested. Both are a big improvement on the normally aspirated units they replace, responsive and efficient, with the base engine managing a competitive 58.9mpg on the combined cycle and 110g/km of CO2. You'll be offered a CVT auto gearbox as an option, but I'd want to stay with the lovely, snickety precision of the standard six-speed stick shift. As for engine alternatives, the 120PS i-DTEC 1.6-litre unit used in the previous generation model has been carried over into this one with only minor changes. Also pretty much unchanged is the 2.0-litre petrol engine used in the flagship Type-R hot hatch, though this now puts out 320PS. You don't need 'Type-R'-style power though, to really enjoy driving this car, thanks to a much stiffer body this time round that improves traction and body control. That more rigid structure also plays its part in contributing to the 'big car' feel we referenced earlier, something further emphasised by the more sophisticated rear multi-link rear suspension set-up. This allows this model to cruise over potholes its direct predecessors would have crashed through.

Fuel costs apart, where Honda has really set out to make the latest Civic differ noticeably from the competition is in specification. To charm out the chequebooks, included as standard on every model are luxury features you won't expect to find at prices that start at around £18,500. The volume 'SE' model gets things like 16-inch alloy wheels, front and rear parking sensors and a DAB 8-speaker 180-watt audio system with USB and Bluetooth connectivity. There's also climate controlled air conditioning and the steering wheel audio controls, rear wiper and heated mirrors.

Could I Live With One?

This improved tenth generation Honda Civic is a great car for taking on a picnic, dashing round town or powering down the motorway for a business appointment. Yes, I would happily make room in my drive for one.